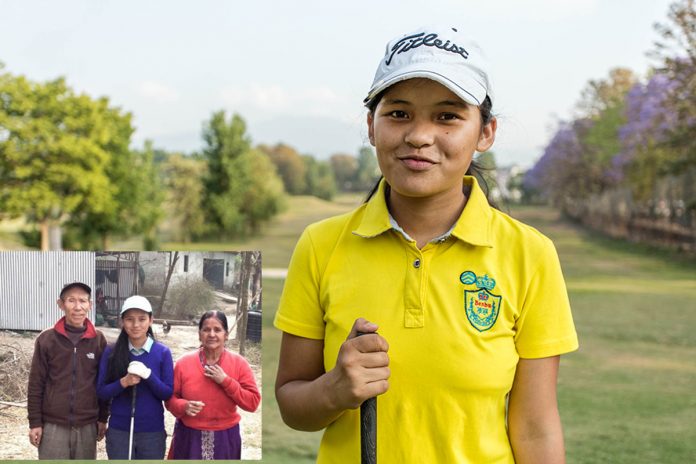 Pratima Sherpa a young Nepali golf star has been tipped to become the country’s first female professional player.
Sherpa is the daughter of laborers who work on the nine-hole golf course, which lies at the end of the runway of Kathmandu’s international airport.

Golf is a sport usually associated with privilege, while Nepal is a country better known for its jagged Himalayan peaks than smooth golf greens.

But those who have watched Sherpa play say she has what it takes to compete and win internationally and make it to the hallowed US-based Ladies Professional Golf Association (LPGA) Tour.

Hopefully, she will be the first Nepalese lady to compete with the LGPA.’

Sherpa was raised in a hut shared with lawn mowers, maintenance equipment, and a few goats, and first started playing with a stick, copying the golfers she saw around her on the course.

The small hut she still shares with her parents is crowded with more than 30 trophies from tournament victories in Nepal.

Sherpa is now a daily sight on the course. She practices under the watchful eye of Bhattarai every morning for two hours before taking the bus to school. Sherpa is pictured playing with her goats

Her parents were initially reluctant to let her play, thinking she’d be out of place as a girl and from a humble background.

Sherpa is now a daily sight on the course, though her routine was briefly interrupted when it was turned into a refugee camp after an earthquake devastated swathes of Nepal in April 2015.

Liverpool fight back against West Ham to win five-goal thriller