LONDON (Reuters) – Manchester United’s 2-0 win at Chelsea on Monday blew open the race for the Premier League’s fourth Champions League qualifying spot, in contrast to the one-horse race for the title which Liverpool seem sure to win.

Both coaches, Ole Gunnar Solskjaer and Frank Lampard, said getting into the Champions League was their focus with almost a third of the season left to play.

“We want to be in the Champions League next year and we’ve given ourselves a chance with this result,” Solskjaer told reporters after headed goals by Anthony Martial and Harry Maguire gave United their first league win in over a month.

Chelsea are still clinging to fourth position with 41 points but the Blues are only one point ahead of London rivals Tottenham Hotspur, who visit Stamford Bridge on Saturday after three straight wins under former Blues coach Jose Mourinho.

Sheffield United and Manchester United are close behind with 39 and 38 points respectively but they too must look over their shoulders at Wolverhampton Wanderers and Everton on 36 points.

Lampard, whose side have now won twice in their last eight league games, lamented the familiar problem of failing to convert chances and said Chelsea had to turn around their shaky form.

“We’re fourth and it’s in our hands. The gap has closed but not many people expected us to be fourth at this stage of the season so the fight starts now,” he said.

Lampard and Solskjaer refused to be drawn on whether second-placed Manchester City’s two-year ban from European competition starting next season might help their clubs by rewarding whoever finishes fifth with Champions League qualification.

Lampard was more willing to talk about an incident involving United defender Harry Maguire who he thought should have been sent off before scoring the second goal for lifting a boot into the groin of Chelsea’s Michy Batshuayi in the first half.

Solskjaer defended his captain, saying he was protecting himself when Batshuayi appeared about to fall on him.

“For me I didn’t think two seconds about it at all,” the Norwegian said. “It hurts definitely when you get hit there but I think he (Batshuayi) is going to be alright.” 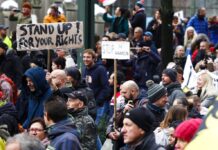 Americans urged not to travel to Germany, Denmark over Covid