WASHINGTON (Reuters) – Republican senators in the U.S. Congress signalled on Thursday that they were hesitant to embrace a call from President Donald Trump for sweeping changes to gun laws, including measures more typically backed by Democrats.

Trump shocked fellow Republicans on Wednesday when he threw his support behind a broad set of restrictions on gun sales in response to the Feb. 14 mass shooting at a high school in Parkland, Florida, that killed 17 people.

The White House is expected on Thursday to release a list of policy measures that Trump backs. The president was set to privately discuss the issue with families of mass shooting victims and law enforcement on Thursday.

John Cornyn of Texas, the No. 2 Senate Republican, told reporters he believes his modest proposal to improve the background check system for gun buyers is the best way forward with the highest chance of success, rather than the more ambitious approach Trump appeared to back.

“I still think it’s the best way forward to get something done and not end up empty-handed,” Cornyn said after meeting with leaders of the Senate Judiciary Committee, Chairman Chuck Grassley and ranking Democratic member Dianne Feinstein.

Cornyn said he hoped to offer his narrowly tailored bill as a “base” for debate on the Senate floor, noting 50 senators have signed up to support it. But Cornyn said the process for considering other measures would be up to Senate Republican Leader Mitch McConnell.

McConnell has not spoken about the issue since Trump’s free-flowing, televised White House meeting with lawmakers.

“So far, there’s been a lot of chopping but I don’t see any chips flying. And I’m not sure that’s going to change,” Kennedy said, noting Americans “feel passionately” about their constitutional rights on gun ownership.

Trump on Wednesday seemed to back several measures that are opposed by the powerful National Rifle Association gun lobby, which backed his 2016 candidacy.

He voiced support for mandating background checks at gun shows and internet sales, and for raising the age for legally buying rifles to 21 from 18.

He also expressed interest in state laws that allow police to temporarily seize guns from people reported to be dangerous, but complained that getting a court order would be too cumbersome.

Republican Senator Pat Toomey said on MSNBC that he believed the meeting showed Trump wants to get legislation done. “I think there’s an old saying about this president, which is ‘Take him seriously, not necessarily literally,'” Toomey said.

“In the end, the president is a supporter of the 2nd Amendment, and he’s also somebody who wants to get things done,” Scalise said.

NRA spokeswoman Dana Loesch said the group believes the focus should be on making schools more secure, rather than restricting constitutional rights to own guns.

“There’s a way that you can respect and protect due process and the rights of millions of Americans while also hardening our schools and keeping our kids safe,” Loesch told Fox News Channel.

Senator Marco Rubio of Florida said on Thursday that he backed restraining orders for guns owned by people deemed to be dangerous, as well as funding for measures to train schools to identify warning signs for violence.

But Rubio backed away from a proposal to change age limits for guns, saying the issue did not have enough support in Congress and needed more study. 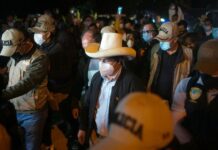 Peruvians head to polls to elect president, divided by class and...

As fighter jets streak overhead, McCain is buried in Annapolis