RIO DE JANEIRO (Reuters) – Clashes broke out in the streets of Rio de Janeiro on Sunday, as a group of fans of hometown soccer team Flamengo, who had gathered in the city center to welcome back players after they won the Copa Libertadores, battled with police.

Tens of thousands of Flamengo fans had flocked to the open-top bus victory parade, thrilled by Flamengo’s first title in 38 years in South America’s biggest club competition. But towards the end of Sunday afternoon, fights broke out between police and red-and-black-clad fans, TV images showed.

The cause of the clashes was not immediately clear. Fans, buoyed by a day of drinking, hurled rocks and bottles at police, who responded with tear gas and rubber bullets.

The incident marked an unfortunate end to a largely peaceful and joyful event. Flamengo’s 2-1 victory against Argentine club River Plate in Lima on Saturday lifted sprits in Rio and Brazil, hit by years of crime, corruption and unemployment. 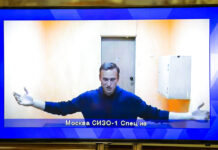