But the refinery is now at risk of falling into the hands of owners of PDVSA’s 2020 bond, which is backed by a 50.1% stake in Citgo, if the opposition fails to make a $913 million payment due at the end of the month.

Guaido has asked Trump to issue an executive order protecting Citgo, so far to no avail.

“Legitimate claimants against the Maduro regime should be made whole, but the burden of the claims should be entirely carried by the Maduro regime or by a democratically elected successor in Venezuela,” seven lawmakers wrote in a letter dated Oct. 10 seen by Reuters.

All but one of the signatories – Representative Lizzie Fletcher – were Republicans, like Trump. Except for Rubio, all represent Texas or Louisiana, where Citgo has refineries.

Rubio, from Florida, has been among the most vocal supporters on Capitol Hill for Trump’s “maximum pressure” policy on Venezuela. Florida is home to many voters of Venezuelan and Cuban descent who support a hard line on Latin American leftists, and is a swing state key to Trump’s 2020 re-election.

Washington has sanctioned PDVSA and encouraged the South American country’s armed forces to rise up against Maduro, who has overseen an economic collapse and is accused of corruption and human rights violations.

But the Citgo issue has divided conservatives. A coalition of right-wing groups including Grover Norquist’s Americans for Tax Reform wrote Trump last month arguing he should stay out of the issue, since an executive order protecting Citgo would interfere with property rights and the free market.

Venezuela’s opposition-controlled National Assembly, which Guaido leads, made a $71 million interest payment earlier this year to protect Citgo, but does not appear to have the resources to make the much larger payment due on Oct. 28.

Guaido’s allies are considering challenging the validity of the 2020 bond in U.S. courts, and requesting a U.N. asset protection order, to save Citgo. 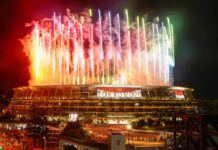 Nepali Ambassador In Europe To Contribute Their One Month Salary In...

Hong Kong protests to target airport after night of violence