A UN inquiry into chemical-weapons use in the war in Syria is set to expire after Russia vetoed a US-sponsored resolution that would have extended its mandate.

The mandate of the Joint Investigative Mechanism (JIM), an inquiry launched jointly by the UN and the Organization for the Prohibition of Chemical Weapons (OPCW) in 2015, will expire at midnight New York time on Thursday.

Eleven Security Council members states voted in favour of the resolution, two abstained, and two voted against it, including Russia, which holds veto power as a permanent member of the council.

“For the tenth time on Syria, and the fourth time on chemical weapons, Russia has actively obstructed the intl comm’s ability to identify the perpetrators of chemical weapons attacks,” Nikki Haley,  US ambassador to the UN, said after the vote.

“The message to anyone listening is clear: in effect, Russia accepts the use of chemical weapons in Syria.”

Earlier on Thursday, US President Donald Trump said on Twitter that the Security Council must extend the JIM’s mandate to ensure President Bashar al-Assad’s government in Syria “does not commit mass murder with chemical weapons ever again”.

“There are many more instances of chemical weapons use in Syria that must be investigated,” the US mission to the UN said in a statement earlier this week.

The US urged the Security Council to “stand united in the face of chemical weapons use against civilians and extend the work of this critical group”.

“Not doing so would only give consent to such atrocities while tragically failing the Syrian people who have suffered from these despicable acts,” the statement said.

But the Security Council has been divided over the JIM’s mandate, with the US and its allies on one side and Russia, a staunch ally of the Assad government, on the other.

Earlier this week, Vasily Nebenzya, Russia’s ambassador to the UN, said the Russian delegation was in discussions with the US over the inquiry’s future.

Russia was also expected to present its own resolution on the work of the JIM, which it said aimed to correct “systemic errors” in the mechanism’s current mandate.

That includes ensuring future investigations are conducted on-site and that a chain of custody is preserved, Nebenzya said on November 13.

“It should be guided by the highest standards that the OPCW provides which they did not follow,” he said, according to a statement posted on the Russian delegation’s website.

After Russia lost a procedural vote at the Security Council on Thursday and was ordered to put its resolution up for a vote before the US proposal, it withdrew its resolution.

Al Jazeera’s James Bays, reporting from the UN headquarters in New York, said both the US and Russia wanted their vote second “because if you have your vote first, then you can see how other people voted”.

“So there is an advantage potentially of being second,” he said.

In its most recent report, released in late October, the JIM concluded that the Syrian government had released sarin gas in an April 2017 attack in Khan Sheikhoun that killed around 100 people.

It also said the Islamic State of Iraq and the Levant (ISIL) group was responsible for releasing sulpur mustard gas in an attack in Umm Hawsh in September last year.

Two women were exposed to mustard gas in that incident, after a mortar shell containing the substance hit a house and another shell was found lodged in the pavement, the UN said.

“There has been sufficient evidence of a credible and reliable nature to make its findings,” said Edmond Mulet, who heads the JIM, during a briefing on the report’s findings.

Though the UN said it was “too dangerous” to visit Umm Hawsh and Khan Sheikhoun, the committee said it had gathered enough information to make a solid conclusion, according to a UN statement.

Mulet said the JIM conducted its work “in an independent, impartial and professional manner”.

Russia vetoed an earlier resolution sponsored by the US to extend the JIM’s work for an additional year, saying at the time that it wanted to wait for the release of the JIM’s report on chemical weapons use by the Syrian government.

Eleven Security Council member states voted in favour of that resolution in late October, while Russia and Bolivia voted against it and China and Kazakhstan abstained.

After Thursday’s vote, Russia has now vetoed 10 resolutions on Syria since the conflict started in 2011.

“We agree that it is vital for the international community to continue to investigate cases where chemical weapons have been used in Syria,” they said. 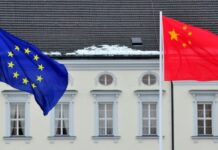