BRUSSELS: Russia on Tuesday quit the Council of Europe, the continent’s leading human rights watchdog, pre-empting an expected expulsion over its attack on neighbour Ukraine.

Russia is only the second country to leave the pan-European group tasked with upholding human rights and the rule of law since its formation after World War II.

Greece had done the same in 1969, also to avoid expulsion, after a group of army officers seized power in a military coup. It rejoined after restoring democracy five years later.

Russia’s withdrawal from the institution that devised the European Convention on Human Rights and helped eastern European nations to democratise their political systems after the collapse of Communism carries symbolic weight.

But the decision, announced hours before a vote on its expulsion in the Council of Europe’s assembly, also has concrete consequences.

The human rights convention will cease to apply to Russia and Russians will no longer be able to appeal to the European Court of Human Rights against their government.

Russia, explaining its departure, accused Western countries of undermining the human rights body, which had suspended Russia’s membership on Feb 25, the day after it invaded Ukraine.

Leonid Slutsky, head of the international affairs committee of Russia’s lower house of parliament, accused the countries of Nato and the EU of seeing the Council of Europe as “a means of ideological support for their military-political and economic expansion to the east”.

In a resolution drafted on Monday but adopted on Tuesday after Moscow’s announcement, the Council of Europe’s assembly said Russia should be pushed out. “In the common European home, there is no place for an aggressor,” it said.

The resolution, adopted by unanimity, said that the impact of Russia withdrawing from Europe’s court of human rights would be mitigated by the fact that Moscow failed to properly act on its judgements.

“My country, Greece, was kicked out of the Council of Europe in the 1970s … this decision strengthened our struggle for democracy and freedom,” he said.

Pyotr Tolstoy, head of the Russian delegation at the Council’s Parliamentary Assembly, said on his Telegram channel that he had handed over a letter from foreign minister Sergei Lavrov announcing Moscow’s decision to leave the watchdog.

The Council of Europe, which is separate from the EU, confirmed it had received Moscow’s letter.

Russia describes its invasion of Ukraine as a “special operation” to demilitarise and “denazify” Ukraine and prevent a genocide of Russian speakers. Ukraine and Western allies call this a baseless pretext for a war of choice. 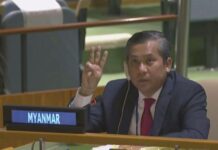 Hamilton expects upgraded Mercedes to be stronger in Canada