MOSCOW (Reuters) – Russian and U.S. officials will urgently follow up Tuesday’s two-hour call between presidents Vladimir Putin and Joe Biden on Ukraine with discussions on “this complex confrontational situation”, the Kremlin said.

Separately, a Russian foreign ministry official was quoted as saying the United States might be included for the first time in a group of countries working to end a seven-year war between Ukrainian government forces and pro-Russian separatists.

Agreement to keep talking was the main tangible result of the video call where the two leaders set out opposing positions on Ukraine, which says it is braced for a possible invasion by tens of thousands of Russian troops close to its border.

Neither side spoke of a breakthrough in the discussion, in which Biden warned Putin that the West would impose “strong economic and other measures” on Russia if it invaded, while Putin demanded guarantees that NATO would not expand eastward.

Russia denies threatening its neighbour and says it is responding to menacing actions by Ukraine and NATO.

“The presidents agreed to appoint their representatives, who will very promptly begin a discussion of this complex confrontational situation, a discussion of strategic security issues on the continent,” Kremlin spokesman Dmitry Peskov said.

He did not give any date or details of how the contacts would take place.

RIA news agency quoted a Russian foreign ministry official as saying there was no reason why the United States should not join the so-called Normandy grouping – comprising Russia, Ukraine, France and Germany – that has attempted but so far failed to end the war in eastern Ukraine.

“A lot depends on the position of Washington in settling the Ukrainian conflict. In principle, if the U.S. is really ready to make a contribution, we’ve always been open to America exercising its influence on Kyiv,” the official, Oleg Krasnitsky, was quoted as saying.

The remarks appeared to indicate that Moscow was open to an offer by U.S. Secretary of State Antony Blinken last week for Washington to facilitate talks on the fighting, which Ukraine says has killed more than 14,000 people since 2014.

Ukrainian Foreign Minister Dmytro Kuleba told Reuters the talks between Biden and Putin had served the purpose of “deterrence and de-escalation”.

But he added that the priority was drawing up a deterrence package to ward off any further military escalation from Moscow.

Millions of young people, led by Sweden’s Thunberg, to strike for... 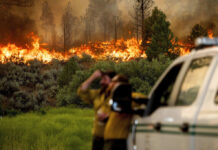