MOSCOW: The Kremlin said today that Russia would keep military forces near its border with Ukraine for as long as it saw fit as Russian-backed separatists said the situation in Ukraine’s Donbass region was worsening.

Western nations have called for restraint after Ukraine raised the alarm over a buildup of Russian forces near its border and violence rose along the line between Kiev’s troops and separatists in Ukraine’s east.

Kiev yesterday called on Nato to lay out a path for it to join the western military alliance, drawing an immediate rebuke from Moscow, which fiercely opposes the bloc’s eastern expansion.

The standoff has redoubled pressure on the Russian ruble, which hit a five-month low against the dollar today.

Russia has said its military movements are defensive and pose no threat.

Today, Kremlin spokesman Dmitry Peskov was asked how long Russian forces would be stationed near Ukraine.

“Russia’s armed forces are on Russian territory in the places it considers necessary and appropriate, and they will stay there for as long as our military leadership and supreme commander consider it appropriate,” Peskov said.

Russian-backed separatists have fought since 2014 against Ukrainian forces in the Donbass, a conflict that Kiev says has killed 14,000 people.

“The situation on the line of contact remains, alas, extremely unpeaceful, the situation is escalating and changing for the worse. The amount of shelling is increasing,” Denis Pushilin, a separatist leader in Donbass, was quoted as saying by TASS news agency.

Ukraine and western countries say Donbass separatists have been armed, led, funded and aided by Russians, including active Russian troops. 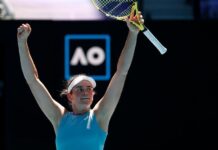