CHICAGO/NEW YORK (Reuters) – Many U.S. pharmacies, including those inside Kroger Co supermarkets and the drugstore chain of CVS Health Corp, say they will not be checking IDs before administering COVID-19 vaccines, leaving the door open to those who do not meet states’ guidelines to jump the line. While the United States has distributed more than 30 million vaccine doses, a little over 11 million had been administered as of Thursday, a lag that prompted U.S. health secretary Alex Azar to call on states to begin vaccinating the vulnerable older population and those with certain chronic health conditions to get more vaccines into arms.

U.S. retailers face a choice of strictly enforcing state eligibility rules with on-site identity checks, or rely on an honor system that could allow people to ignore those guidelines but also get more people inoculated.

“State and local guidelines vary across the 40 public health jurisdictions we serve, but in most cases, identification will not be required to receive the vaccine,” a Kroger spokeswoman said. The biggest U.S. grocery chain has so far administered about 7,800 COVID-19 vaccines to healthcare workers and nursing home staff and residents.

Twenty-two states have moved toward using age as the main criteria for prioritizing inoculations, with four more set to follow next week. Others are adhering to strict guidelines meant to assure that scarce coronavirus vaccine supplies went first to healthcare workers, nursing home residents and first responders.

Teachers and other “essential workers” are supposed to be among those next in line as distribution widens, but who qualifies as an essential worker varies by state.

“We are not planning to ask for ID to receive a COVID-19 vaccination,” a CVS Health spokesman said. “These vaccinations will be appointment-only in our stores and patients will have already gone through an eligibility screening when they register for an appointment on our website, through our app or via a 1-800 number.”

However, the accuracy of information provided in eligibility screenings conducted by some companies is not automatically checked at the vaccination sites.

Walgreens Boots Alliance said it would follow state and local guidance on how to verify eligibility.

Hy-Vee, which operates grocery stores and pharmacies in Illinois, Kansas, Missouri and Wisconsin and other Midwestern states, said it has included its own warning on its website that ID may – or may not – be asked for prior to the shot being given. “So far, we have had no problems,” a spokeswoman said.

Stop & Shop Supermarket, located in the northeastern United States, said it would check IDs or pay stubs if instructed to do so by individual states. Publix Super Markets, which operates in Florida and other southeastern states, said people would need to provide “proof of insurance and/or their driver’s license or social security card.” “GET THEM INTO THE ARMS”

In Washington D.C., which relies on pharmacy chains Safeway and Giant Food to administer vaccines, it is unclear who verifies people’s healthcare worker status.

A district website allowing healthcare workers to register for a vaccine tells them they will be verified via their work ID badge or an employer letter during the pharmacy appointment.

But Giant Food in a statement said it was just checking the photo ID and insurance card of anyone who secured an appointment through the district’s website.

A spokeswoman for the DC health department said the vaccination team would raise the issue with Giant Food. Safeway parent Albertsons Companies Inc did not respond to requests for comment.

Schaffner said the solution was to increase vaccine availability and hire more vaccinators.

“The more vaccines you have, the less you have to worry about prioritization,” Schaffner said. “We know it’s not going to be perfect, but who cares, we need to get them into the arms.” 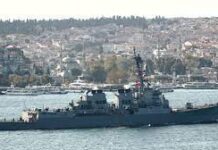 Introducing the world’s tallest statue – nine times bigger than the...