LONDON (Reuters) – The Manchester City winning machine ploughed on relentlessly towards the title with a 1-0 Premier League defeat of Arsenal courtesy of Raheem Sterling’s goal after 75 seconds on Sunday.

Sterling’s header from Riyad Mahrez’s cross caught Arsenal cold and was enough for City to claim an 18th consecutive win in all competitions and preserve their 10-point lead.

The visitors dominated possession and created numerous chances but were unable to kill off Arsenal, although City keeper Ederson was rarely called into action.

Pep Guardiola’s side’s 13th successive league victory lifted them to 59 points from 25 games with Leicester City in second place on 49 points after they won 2-1 at Aston Villa.

“Every game you are not going to win games 2-0, 3-0, 4-0, sometimes when you win 1-0 it is so good,” Guardiola said after his side equalled a club record of 11 successive away wins they also achieved under the Spaniard in 2017.

“We have to realise what we are doing is so difficult. It is a struggle, a fight, behind the ball and that is why we like this result. “It is one more, one more.

“We think all the time about the next one.”

Although the scoreline looked close, Arsenal barely laid a glove on the league leaders and could have been buried in the opening 25 minutes in which City were totally dominant.

Arsenal managed only one effort on target and appeared for most of the game to be protecting a narrow loss.

“When we conceded the first goal it put us in a difficult situation. It was tough. With their formation and players they use they are really comfortable,” Arsenal manager Mikel Arteta, Guardiola’s former assistant at City, said.

The surprise was that the winner came from the head of Sterling, who are 5ft 7ins is not known for his aerial powers.

He demonstrated great spring, though, to climb high and glance in Mahrez’s pinpoint cross with Arsenal’s defence looking on. Sterling should have scored again five minutes later when Kevin de Bruyne, back in the starting lineup for the first time after a month-long injury layoff, slid him in but he over-elaborated and the chance went begging.

Joao Cancelo then got in behind Arsenal’s defence but his cut back failed to pick out a City player.

As City’s pressing game relented slightly Arsenal did manage to stem the tide without really threatening.

Arsenal failed to mount any sustained pressure, however, and City were comfortable after the break and should have added a second. Ilkay Gundogan was denied by Bernd Leno, De Bruyne sliced one effort over and Cancelo slid s shot narrowly wide after a neat interchange with Gabriel Jesus.

Sterling’s strike proved enough, though, to secure a routine victory for a City side who look unstoppable. 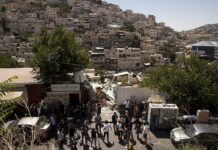