TAIPEI: Taiwan’s government said today it was tightening export curbs to Russia as part of sanctions on the country for its invasion of Ukraine, detailing rules to prevent technology and chips from being used for military purposes.

Taiwan has condemned Russia’s attack and already joined the western-led sanctions effort, though it is largely symbolic as there is only minimal direct trade between the island and Russia.

Taiwan’s cabinet said in an announcement that any companies wishing to export a long list of tech-related goods to Russia would need to seek permission.

The move has been made “in order to prevent our country from exporting high-tech goods to Russia for the production of military weapons”, the Cabinet added.

The list includes equipment for making semiconductors, the production of which Taiwan is a world leader in, as well as lasers and navigation systems.

The economy ministry added in a separate statement that it “urges industry to follow the export control laws, conduct due diligence before exporting, and avoid exporting products from the ‘Russian export list’ that can be used for weapons proliferation to Russia without approval”.

It said it had produced the list based upon what other allied countries were doing and that in total it covered 57 “controlled items”.

A US official said last week that Taiwan’s TSMC, the world’s largest contract chipmaker, had exited the Russian market, cutting off the Moscow Centre of SPARC Technologies’ access to Elbrus chips, which are widely used in Russian intelligence and military systems.

Ukraine’s plight has won broad public sympathy in Taiwan due to what many people view as the parallels between what it happening in the European country and what could happen if China ever uses force to bring the island it claims as its own territory under Chinese control.

India and China troops clash at disputed border with ‘casualties on... 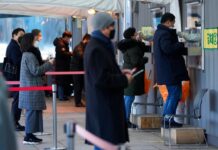 ﻿Joe Biden to kick off presidential bid with speech to union...