The Spaniard’s biggest hurdle in his quest for a record 14th title at Roland Garros was defending champion Djokovic but Nadal overcame the world number one in a vintage quarter-final.

Zverev will have a chance to spoil the birthday party for Nadal, who turns 36 on Friday, and victory for the third seed would keep the Olympic champion on course for a maiden major title and the chance to climb to the top of the rankings.

In the second semi-final on Court Philippe Chatrier, 2014 U.S. Open champion Marin Cilic and eighth seed Casper Ruud of Norway will slug it out for a maiden final place at Roland Garros.

Victory over the 33-year-old Cilic would make Ruud the first player from Norway to reach a Grand Slam singles final.

Nadal holds a 6-3 head-to-head record against the 25-year-old Zverev with the Spaniard winning four out of five times they have met on clay.

The left-hander, who won the Australian Open in January for a record 21st major title, will be fully focused.

“I am not the kind of guy and player that emotionally goes high and low. I am very stable, I think, emotionally,” Nadal said.

Zverev, who reached the 2020 U.S. Open final, beat a first top-10 opponent at a Grand Slam in 12 attempts when he took down Spanish teenager Carlos Alcaraz, ranked sixth, in the quarter-finals.

“I am expecting a very close match. I think the weather conditions are going to be extremely important,” Eurosport tennis expert Wilander said. “For once the sun and the heat is not going to favour Nadal.

“It’s going to be great for Zverev, for his first serve, it’s going to be nearly impossible to return. And if that is the case then he can relax a little bit in Rafa’s service games.

“But, of course, beating Rafa in five sets, there’s a lot more than playing well that you have to do. So Rafa’s slight favourite in my eyes but hot conditions will favour Zverev I think.”

Ruud, 23, will go into his clash with Croatia’s Cilic having won both previous meetings.

Cilic has joined Roger Federer, Nadal, Djokovic and Andy Murray as the only active players to make the semi-finals at all four majors.

“Cilic, the way he’s playing might be a little bit of a favourite,” Wilander said about the former world number three, whose last semi-final appearance at a major was in the 2018 Australian Open.

“He’s hitting the ball unbelievably hard, he’s serving huge and gets a lot of free points. A very difficult match to call, I would say it’s 50-50 and a lot has to do with how Cilic serves.” 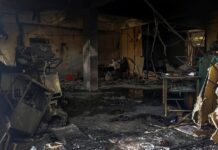