LOS ANGELES: Thousands of Coloradans were placed under evacuation orders for the latest wildfire to tear through parts of the Rocky Mountain US state, where authorities Sunday said the blaze was partially contained.

Boulder fire rescue officials said this weekend’s fire was less intense but nevertheless edged within hundreds of yards (metres) of homes in the city’s southern suburbs and a national atmospheric research centre, forcing the evacuations of nearly 20,000 residents late Saturday.

But with hundreds of firefighters converging on the blaze, and the successful use of fixed-wing air tankers and other aircraft to spread fire retardant, officials said the evacuation order was reduced to about 1,600.

No one has been reported missing, dead or injured, and the fire was now 21% contained, Boulder incident management team member Mike Smith told reporters.

“We’re going to continue to try and corral this fire up into the rocks, into the snow” and away from the city, Smith said.

Like much of the American West, Colorado has been in the grip of a years-long drought that has left the area parched and vulnerable to infernos.

Although fires are a natural part of the climate cycle and help to clear dead brush, their scale and intensity are increasing.

Scientists say a warming climate, chiefly caused by human activities such as the unchecked burning of fossil fuels, is altering weather patterns.

“We’re nervous about the season coming up,” Smith acknowledged. 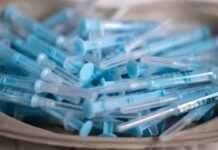