US President Donald Trump has signed an executive order allowing Washington to ramp up sanctions against North Korea over its nuclear missile programme.

The move on Thursday came two days after Trump warned North Korean leader Kim Jong-un in his address at the UN General Assembly that the US, if threatened, would “totally destroy” his country of 26 million people.

Announcing the executive order, Trump said the measure would allow sanctions against “individuals and companies that finance and facilitate trade” with Pyongyang.Trump threatens to ‘totally destroy’ North Korea in UN speech

Industries set to be targeted include textiles, fishing, information technology and manufacturing.Pyongyang has resisted international pressure, conducting its sixth and largest nuclear test on September 3, and launching numerous missiles this year, including two intercontinental ballistic missiles and two other rockets that flew over Japan.

The United Nations Security Council has unanimously imposed nine rounds of sanctions on North Korea since 2006, the latest earlier in September capping fuel supplies.
Also on Thursday, diplomatic sources told AFP news agency that the European Union had agreed on new sanctions against North Korea, including a ban on investments in the country and on EU exports of oil.

Speaking on condition of anonymity, the sources said that EU members also want to blacklist more North Korean individuals and entities, a move that would freeze their assets in the bloc and ban them from entering its territory.
Earlier on Thursday, South Korean President Moon Jae-in, sitting with Trump and their respective delegations, said the US president’s warning to Pyongyang on Tuesday “will also help to change North Korea”.
It was Trump’s most direct military threat to attack North Korea and his latest expression of concern about Pyongyang’s repeated launching of ballistic missiles over Japan and underground nuclear tests.

On Thursday, South Korea’s Moon said sanctions were needed to bring Pyongyang to the negotiating table and force it to give up its nuclear weapons, but Seoul was not seeking North Korea’s collapse.
He added that Pyongyang’s nuclear issue “needs to be managed stably so that tensions will not become overly intensified and accidental military clashes will not destroy peace.”
Moon said all countries must strictly adhere to UN sanctions on North Korea and impose tougher steps in the event of new provocations by Pyongyang. 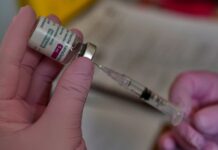