ANKARA (Reuters) – A day after two major ratings agencies downgraded Turkey closer to junk status amid a currency crisis, Turkish President Tayyip Erdogan said he would challenge those playing “games” on the economy.

Standard & Poor’s cited extreme lira volatility and forecasted a recession next year. The rating agency downgraded the rating by one notch to B+ from BB- and kept Turkey’s outlook at stable in a move which came after the lira lost some 40 percent of its value against the dollar this year.

“Today some people are trying to threaten us through the economy, through interest rates, foreign exchange, investment and inflation,” Erdogan told the congress of his ruling AK Party.

“We are telling them: we’ve seen your games, and we are challenging you.”

The lira has plunged as investors fret about Erdogan’s influence over monetary policy.

Heavy selling in recent weeks has spread to other emerging market currencies and global stocks and deepened concerns about the economy, particularly Turkey’s dependence on energy imports and whether foreign-currency debt poses a risk to banks.

On Friday, Turkey’s battered lira weakened 3 percent after a Turkish court rejected an American pastor’s appeal for release, drawing a stiff rebuke from President Donald Trump, who said the United States would not take the detention “sitting down”.

The case of Andrew Brunson, an evangelical Christian missionary from North Carolina who has lived in Turkey for two decades, has become a flashpoint between Washington and Ankara and accelerated a widening currency crisis.

“We did not and will not surrender to those who act like a strategic partner but make us a strategic target,” Erdogan said, in a reference to the United States.

Scientists peer into heart of hurricanes to improve intensity forecast

Pakistan has given us lies and deceit, says Donald Trump as... 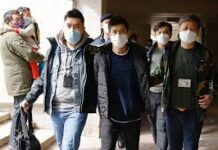 Hong Kong arrests 53 activists for attempt to “overthrow” govt with...