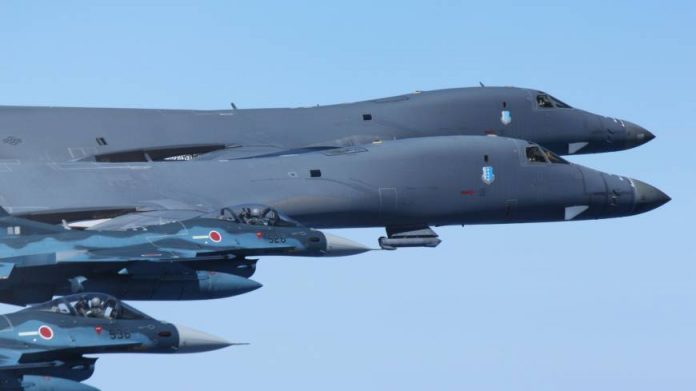 The U.S. military sent four of its most advanced stealth fighter jets, along with two heavy bombers, for joint drills with Japanese and South Korean warplanes near Japan and over the Korean Peninsula on Monday in a “show of force” after North Korea’s missile launch over Hokkaido three days earlier.

On Friday, North Korea lobbed an intermediate-range missile over Japan for the second time in less than three weeks. That missile traveled some 3,700 km, stoking concern in Tokyo and putting the U.S. territory of Guam, home to key American military bases, easily within the North’s crosshairs.

In response, the U.S. military has ramped up the pace of bilateral exercises with its Asian allies as part of military muscle-flexing meant to deter the isolated regime, which has made great leaps in its missile and nuclear programs over the last two years.

However Monday’s drills, which involved a total of 14 aircraft, were rare in their sheer size and scale.

The training mission saw the F-35Bs, B-1B bombers and ASDF fighters conduct formation drills over waters near Kyushu, the Pacific Command said. The U.S. aircraft then made their way to the Korean Peninsula, where they honed their attack capabilities with the South Korean Air Foce by releasing live weapons at the Pilsung Range training area.

During their flight, the South Korean fighters and U.S. warplanes also made the “highly unusual” move of approaching the tense inter-Korean border, the South’s Yonhap news agency reported, quoting an unidentified government source.

The U.S. military last sent B-1Bs from Guam to the region for training with ASDF fighter jets over the East China Sea on Sept. 9, the anniversary of North Korea’s founding. Prior to that, it dispatched two of the bombers and four F-35Bs to the area on Aug. 31 for joint drills in a “direct response” to the North’s earlier launch of a missile over Japan.

Overflights of the Korean Peninsula by heavy bombers such as the B-1B have incensed Pyongyang.

The North views the flights by what it calls “the air pirates of Guam” as a rehearsal for striking its leadership and has routinely lambasted them as “nuclear bomb-dropping drills.”

While not nuclear-capable, the B-1B — six of which are currently positioned in Guam, 3,360 km from North Korea — is regarded as the workhorse of the U.S. Air Force and has been modernized and updated in recent years.

A handshake and a dearth of masks at Pence’s Republican convention... 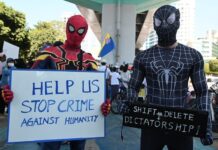 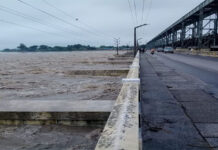