“An Emirati car transporter ship sank nearly 50km from the port of Asalouyeh and a search operation has been launched to rescue its 30 crew members,” a local maritime protection official told the state IRNA news agency.

“Because of the unfavourable weather and high winds” the vessel sank before three rescue vessels could reach its location, the official said.

The official said the crew were in the water but wearing life jackets.

Iran’s weather service had put out a red alert yesterday for high winds and heavy seas in the waters off Asalouyeh.

The official did not give further details of the stricken vessel.

As well as a port, the town of Asalouyeh is a major petrochemicals centre on the Gulf coast southeast of the city of Bushehr. 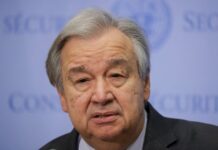