MANCHESTER, England (Reuters) – Prime Minister Boris Johnson made a final Brexit offer to the European Union on Wednesday and said that unless the bloc compromised, Britain would leave without a deal at the end of this month.

In what supporters cast as a moment of truth after more than three years of crisis, Johnson stuck to his hard line on Brexit, giving some of the first, albeit vague, details of what he described as “constructive and reasonable proposals”.

With the Oct. 31 Brexit deadline moving closer, Johnson’s aides cast the proposals to be delivered to Brussels as London’s final gambit to try to break the deadlock – principally over arrangements for the Irish border – and find a path to a smooth departure from the EU.

“We are coming out of the EU on October 31, come what may,” Johnson told party members, after expressing “love” for Europe in a speech which focused mostly on domestic issues such as health, the economy and crime.

“We are tabling what I believe are constructive and reasonable proposals which provide a compromise for both sides,” Johnson said. “Let us be in no doubt that the alternative is no deal.”

The seven-page explanatory note calls for the creation of an all-island regulatory zone on the island of Ireland covering all goods, thus eliminating checks for trade in goods between Northern Ireland and Ireland.

The regulatory zone would be dependent on the consent of the institutions of Northern Ireland, which would remain fully part of the United Kingdom’s customs territory, the document said.

Many diplomats fear the United Kingdom is heading towards a no-deal or another delay as they say the British proposals are not enough to get an agreement by Oct. 31. Johnson said further delay was “pointless and expensive”.

The initial reaction from other European capitals was cool. Berlin and Paris said they were awaiting details.

EU diplomats and officials in Brussels were less polite with one calling the reported proposals “fundamentally flawed”.

“If it’s take it or leave it, we better close the book and start talking about the modalities of an extension,” a senior EU official told Reuters.

“Essentially it is a non-runner,” said another EU diplomat. Touring, crop-guzzling elephants cause millions in losses in China 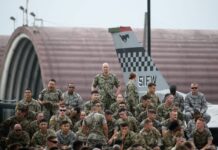