“The enemy has almost finished preparation for assault on the east, the attack will begin soon,” he said.

“We don’t know precisely when, but the preparation is almost over.”

After rebuffing a Russian offensive on Kyiv, Ukraine has for days said a renewed Moscow attack on its east and south is looming.

“We are predicting that intense fighting will take place in these territories in the near future,” Motuzyanyk said.

“We cannot predict exactly when this will happen, these are sources from Western intelligence,” he said.

“The Ukrainian army is ready.”

The military official said he believed Moscow planned to create a “land corridor” to the Kherson region, north of Crimea, which it controls.

He also said that a renewed Russian attack on Kyiv “depends on fighting” in the eastern regions.

Some analysts have said that Russian President Vladimir Putin is counting on a victory ahead of the annual May 9 parade in Moscow that commemorates the Soviet defeat of the Nazis.

Over the last week, Kyiv has urged residents of eastern regions to leave their homes before the anticipated Russian attack.

At least 57 people died as a result of the shelling of a train station in the eastern city of Kramatorsk last week, where many awaited evacuation.

Ukraine said that Russian shelling in the eastern Kharkiv region killed at least 11 civilians over the weekend.

Monsoon To Have Delayed Exit, Rain Forecast Till Saturday 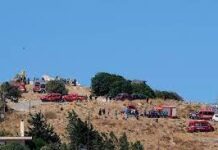