WASHINGTON: Ukrainian Prime Minister Denys Shmyhal said Sunday that the strategic port city of Mariupol “has not fallen” and that the encircled forces defending the city from Russian attack will “fight to the end.”

But with the fate of those embattled fighters looking increasingly grim, Foreign Minister Dmytro Kuleba warned that Russian troops appeared to have decided to level the city.

The Ukrainian officials were speaking hours after a Russian ultimatum for the surrender of the encircled fighters, holed up in a fortress-like steelworks in Mariupol, had expired.

“The city still has not fallen,” Shmyhal said on ABC’s “This Week.” “There’s still our military forces, our soldiers. So they will fight to the end.”

Kuleba, who appeared on CBS’s “Face the Nation”, said that not only Ukrainian soldiers but also “a large group of civilians” were essentially surrounded.

“They continue their struggle, but it seems from the way Russian army behaves in Mariupol, they decided to raze the city to the ground at any cost.”

In a sign of the desperate situation facing Kyiv’s forces in Mariupol, Ukrainian President Volodymyr Zelensky said Saturday that if they were killed, peace talks with Moscow would be scrapped.

Russian President Vladimir Putin had already said the talks were at a “dead end”.

Shmyhal told ABC that “if the Russians wouldn’t like negotiations, we’ll fight to the end, absolutely. We will not surrender.

“We won’t leave our country, our families, our land. We will fight to the end.”

Asked about reports that Putin believes Russia is winning the war, Shmyhal pushed back.

While several cities are under siege, he said, not one — with the exception of Kherson in the south — had fallen. He said more than 900 towns and cities had been liberated.

The capture of Mariupol, however, would represent a severe blow to Ukraine, both strategically and symbolically, as it would help Moscow open a land route to the Russian-occupied Crimean peninsula.

The country, he said, is seeing a “huge humanitarian catastrophe”, and needs further help “to save our economy for future recovery”.

“Now, only half of our economy is working” and Ukraine faces a huge monthly budget deficit of US$5 billion, Shmyhal said.

He said Ukrainian officials would be in Washington in the coming week to press the country’s needs at the spring meeting of the World Bank and International Monetary Fund. 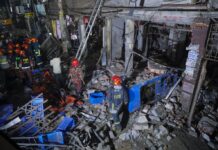