The airline can also choose to purchase 35 more from Boom in the future, it said in a press release.

Boom’s first commercial super-fast plane, called Overture, hasn’t been built yet, but it’s expected to be operational in 2025, take to the skies in 2026, and carry passengers by 2029, United said.

Overture could become the first big commercial aircraft to be net-zero carbon, and will run on fully sustainable aviation fuel, according to United.

The supersonic jet, when built, will be able to fly twice the speed of the fastest airliners in today’s market, cutting some flight times in half, the American airline company said.

Possible future journeys include Newark to London in three and a half hours, Newark to Frankfurt in four hours, and San Francisco to Tokyo in six hours, United said.

“The world’s first purchase agreement for net-zero carbon supersonic aircraft marks a significant step toward our mission to create a more accessible world,” Blake Scholl, CEO and founder of Boom Supersonic, said in the statement.

“At speeds twice as fast, United passengers will experience all the advantages of life lived in person, from deeper, more productive business relationships to longer, more relaxing vacations to far-off destinations,” he said.

The world got a taste of supersonic flight in the 1970s with the Concorde. However, with the jet’s fatal crash in 2003, planes have remained well below the speed of sound ever since. 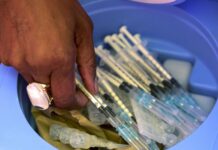 WHO: 3 of 70 coronavirus vaccine candidates are in clinical trials