Uruguay, Argentina and Colombia qualified for next year’s World Cup on Tuesday after a dramatic last round of South American matches that also saw Peru clinch a spot in a playoff against New Zealand.

Argentina, finalists three years ago but outside the qualifying spots going into their match against Ecuador, went behind in the first minute but an inspired Lionel Messi scored a hat-trick to guarantee his side one of the three automatic qualifying spots still up for grabs.

Uruguay also went behind, to an own goal from Gaston Silva after 24 minutes, but they bounced back with two goals either side of half time to secure second place in the 10-team South American group behind five-time World Cup winners Brazil.

Martin Caceres, Edinson Cavani and two from Luis Suarez gave the home side a commanding lead before Diego Godin’s own goal made it 4-2.

A second-half goal from Paolo Guerrero gave Peru the chance of a first World Cup appearance since 1982 when his brilliant free kick in Lima cancelled out the opener from James Rodriguez.

Peru advanced to a playoff against Oceania champions New Zealand.

Five-times champions Brazil had already qualified before their 3-0 win in Sao Paulo against Chile, who failed to qualify.

Three second-half goals, one from Paulinho and two from Gabriel Jesus, saw the group leaders extend their unbeaten run in the qualifiers to 17 games.

Paraguay also missed out when they lost 1-0 at home to bottom side Venezuela. 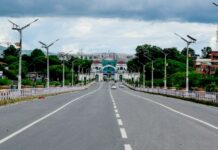