TOKYO: The US, China, Japan and Russia are among the countries planning to conduct joint research on fishing in the Arctic Ocean in a step toward setting forth international rules, Nikkei has learned.

Representatives from nine countries and the European Union are planning to meet in South Korea early next year to discuss fishing quotas based on similar treaties covering other regions.

Starting with the quotas, which could take effect as early as 2022, the group intends to gradually expand guidelines to enforce sustainable fishing.

Their efforts are based on an international agreement to ban unregulated fishing in the Arctic that went into force in June.

That the US, China and Russia – the three most influential players in the region – have all signed on to the arrangement has raised hopes for international cooperation in other projects in the Arctic.

Global warming has reduced ice coverage in the Arctic region by as much as 40% since the last century. As potential fishing grounds expand, it has become imperative to spell out rules to prevent unchecked fishing.

The joint research aims to track the types of fish in the Arctic and their current catch levels. If a fish stock is deemed sufficient, a rule will be issued to allow commercial fishing within set quotas.

The members, which also include Canada, Denmark, Norway, Iceland and South Korea, will discuss setting up a body to manage resources to enable monitoring for unchecked fishing and settle fishing disputes. The goal is to establish those international rules by 2023-2024.

The Arctic lacks global rules like the Antarctic Treaty. Countries are vying to tap its rich resources, including oil, natural gas and rare earths.

China is already planning a rare-earth mining project in Greenland, a move that has prompted local backlash.

Russia, which has the largest territory within the Arctic, launched a liquefied natural gas project in the Yamal Peninsula in Siberia in 2017.

To open up more sea lanes, it is building large-scale icebreakers as well. Russia’s massive Arctic military drills in the spring raised alarm among US officials. 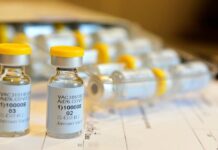 J&J 1-dose shot prevents COVID-19, but less than some others