WASHINGTON: Senior US officials fanned out this week to press world leaders to keep piling pressure on Moscow or join the campaign of sanctions and other measures, as the war in Ukraine enters its fifth week and the initial economic shock to Russia seems to be ebbing.

The effort comes as the initial impact of unexpectedly tough sanctions on Russian banks, oligarchs and companies begins to wear off somewhat, and the US considers its next economic steps to isolate Russian President Vladimir Putin.

Within days of cutting off key Russian banks from the international SWIFT financial transactions network and immobilising the bulk of the Russian central bank’s US$630 billion foreign exchange war chest, the ruble lost half its value, prompting US officials to declare that Moscow was battling a financial crisis.

But a month later, the ruble has largely recovered to its level just before the invasion, propped up partly by Russian capital controls, government orders for export firms to sell foreign currency and companies gathering funds to make quarter-end tax payments.

Shares on Russia’s stock market are trading again, although they have dropped in value.

Russian bank, a principal sanctions target, remains open for business in Europe, where it has gathered billions of euros in deposits, mainly from German savers. Other Russian banks are considering China’s UnionPay credit card system after Visa and Mastercard suspended Russian operations.

And the sanctions thus far have left Russia’s biggest economic lifeline untouched – energy sales to Europe, which could be up to €500 million a day at current prices. Russia is demanding payments in roubles for gas starting on Friday, which could boost the currency further.

The Biden administration is making sure European allies are firmly aligned on punishing Putin while working to sway leaders who have sat on the sidelines as the war stretches on, officials say.

“We’ve got to continue to raise pressure on Russia and increase our support for Ukraine,” one senior US official said, speaking on condition of anonymity. “This is a challenge that is facing the free world and all democratic nations. And we need to be prepared for it to last a long time.”

The visits follow closely on the heels of Biden’s visit to Europe last week and come as Russia and China – the world’s second largest economy – draw ever closer together.

Deputy treasury secretary Adeyemo’s discussions with his European counterparts centred on sanctions, the impact of India and China on Russia’s potential sanctions evasion efforts, and how to help countries like Germany cover their energy needs in the event of a Russian embargo, said one European official.

One key issue was Russia’s demand that foreign buyers pay for their Russian gas imports in rubles starting Friday or face supply cutoffs, the European official said. European capitals have rejected the demand, and the German government said it amounted to “blackmail”.

It is imperative the US keep tending its relationships with allies, said Catherine Novelli, a former senior US trade official and diplomat, underscoring the difficulty of maintaining the momentum of sanctions and other punitive measures after the initial outrage wanes.

In India, White House economic adviser Singh, who led efforts to coordinate the Western response to the war, told officials Washington would not set any red lines about purchasing oil but warned against the rapid acceleration of purchases.

India has a military dependence on Russian technology and hardware and has tried to balance its long-standing ties with Russia and the West. Unlike other members of the Quad group of countries – the US, Japan, Australia – it has not imposed sanctions on Russia.

Singh spoke ahead of Russian foreign minister Lavrov’s arrival in the Indian capital for a two-day trip. 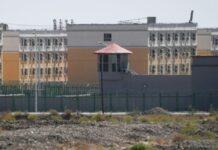 HRW finds China guilty of ‘crimes against humanity’ towards Uighurs

China is Growing Cotton on the Moon