IPIALES, Colombia (Reuters) – More than 200 Venezuelans crossed the border illegally into Ecuador on Tuesday, fleeing a deepening economic and political crisis at home in a desperate race to get to Peru before new entry restrictions kick in on Saturday.

This year 423,000 Venezuelans have entered Ecuador through the Rumichaca border near the southwestern Colombian town of Ipiales. Alarmed, Ecuador last Saturday put in place rules requiring Venezuelans to show passports, rather than just national identity cards. Peru will do the same this Saturday.

Hundreds of migrants who had begun travelling days ago by bus and on foot through Colombia from Venezuela before the policy change crossed the Rumichaca checkpoint on Tuesday. More than a dozen Ecuadorean police watched them, but did nothing to stop them.

“We only want Ecuador to support us to keep moving forward to Peru where we can work,” said Yorian Alcides Gamez, as fellow migrants sang the national anthem.

They plan to walk and hitchhike 840 kilometres (522 miles) in freezing conditions to the crossing at Huaquilla in Peru.

Like Gamez and Vinales, hundreds of migrants had planned to cross legally with their Venezuelan national ID card to find work in Ecuador, Peru or Chile.

Sleeping in tents and on streets, tension is mounting as conditions worsen, migrants complain of the cold and the little money they have for food is running out. Arguments have started to break out as they vent anger at Ecuador.

“We’re really very disappointed, we feel alone, desperate, we never thought that the government of Ecuador would do that to us, when in my country they were so well-received in their time of need,” said Deisy Santana, a 48-year-old construction engineer. “Some people have been travelling by foot 30 days and their feet are destroyed.”

Ecuador’s foreign and interior ministries did not immediately respond to requests for comment.

Venezuela’s economy has been in steep decline and there are periodic waves of protests against the leftist government of President Nicolas Maduro. Maduro argues that he is the victim of a Washington-led “economic war” designed to sabotage his administration through sanctions and price-gouging.

The chaos has forced many to flood across the borders in search of work, food and basic healthcare. Latin American governments initially welcomed them, mindful of Venezuela’s role in taking in those fleeing dictatorships and conflict in the past.

But the ballooning exodus this year has stretched social services, created more competition for low-skilled jobs and stoked fears of increased crime. In Brazil, angry residents of a border town ran riot and drove out migrants on Saturday after a restaurant owner was stabbed and beaten.

World leaders only act like they care about climate fight, says... 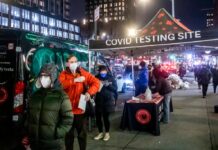