The performance offered a glimpse into the health of the U.S. consumer as spending was helped by a strong labor market and cheaper gasoline prices.

“We still feel pretty good about the consumer. We haven’t seen much of a change,” Walmart Chief Financial Officer Brett Biggs told Reuters. “The data we are seeing still looks pretty healthy. Gas prices are down year over year, which helps.”

U.S. retail sales recorded their biggest drop in more than nine years in December, the government reported last week, as receipts fell across the board, suggesting a sharp slowdown in economic activity at the end of 2018.

Overall sales for the 2018 U.S. holiday shopping season hit a six-year high as shoppers were encouraged by early discounts, according to a Mastercard report in late December.

Walmart sales at U.S. stores open at least a year rose 4.2 percent, excluding fuel, in the fourth quarter ended Jan. 31. The gain exceeded analysts’ expectations of 2.96 percent, according to IBES data from Refinitiv.

Online sales jumped 43 percent during the quarter, in line with the previous quarter’s rise, helped by the expansion of Walmart’s online grocery pickup and delivery services and a broader assortment on its website.

The company has expanded a program that allows customers to order groceries online and pick them up at its U.S. stores. It said it will have the service at 3,100 stores by next January. At the end of the third quarter it was offered at 2,100 stores.

Walmart will add grocery deliveries to about 800 more stores by the end of the year, bringing the total to 1,600 stores during the same period.

Grocery sales currently make up 56 percent of total revenue. At its investor day last year, Walmart Chief Executive Officer Doug McMillon claimed that Walmart has an advantage in the food category by offering fresh food within 10 miles of 90 percent of the U.S. population.

Walmart is partnering with third-party couriers and working with so-called gig, or freelance, drivers, who are cheaper than full-time employees, to drive down costs, Reuters recently reported.

The U.S. retailer, which overtook Apple Inc to become the third largest e-commerce retailer last year, is likely to capture a 4.6 percent share of the U.S. e-commerce market, behind eBay Inc and Amazon, according to research firm eMarketer.

Walmart repeated its forecast that fiscal year 2020 earnings per share would decline in the low single digits in percentage terms, compared with last year. Excluding the acquisition of Indian e-commerce firm Flipkart, it sees an increase in the low- to mid-single-digits.

Walmart has recorded 18 quarters, or over four straight years of U.S. comparable sales growth, unmatched by any other retailer.

Explainer: How the U.S. is handling immigration enforcement during the coronavirus... 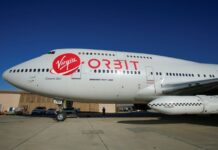