The magnitude of Apple’s holiday quarter revenue shortfall sent shockwaves through the technology sector, which pulled all three major U.S. stock indexes down more than 2 percent, with the Nasdaq posting a 3 percent loss.

Late Wednesday, Apple chief executive Tim Cook wrote in a letter to investors that the company had not foreseen the extent of China’s economic deceleration, which was exacerbated by U.S.-China trade tensions. The iPhone maker’s shares dropped 10.0 percent.A report from the Institute for Supply Management showed U.S. factory activity USPMI=ECI in December suffered the biggest drop since October 2008, the height of the financial crisis. Its PMI reading, while still in expansion territory, hit its lowest level in more than two years.

“The Chinese slowdown was expected but today’s softer-than-expected ISM number took investors by surprise because the U.S. seemed to be the only port in the storm,” said Sam Stovall, chief investment strategist of CFRA Research in New York. “But now it appears that our economic growth is facing trade related headwinds.”

“Investors are worried that this is an indication that things could be getting worse from here and Apple is only the tip of the iceberg,” Stovall added.

Of the 11 major sectors in the S&P 500, all but defensive real estate .SPLRCR and utilities .SPLRCU stocks closed in the red.

Yields on 2-year Treasuries dipped below the federal funds effective rate for the first time since 2008, a move many believe suggests the central bank will not be able to continue its monetary tightening policy. The outlook for higher rates has been considered a headwind to equities in recent months.

Declining issues outnumbered advancing ones on the NYSE by a 1.39-to-1 ratio; on Nasdaq, a 2.28-to-1 ratio favored decliners.

Volume on U.S. exchanges was 8.11 billion shares, compared to the 9.16 billion average over the last 20 trading days. 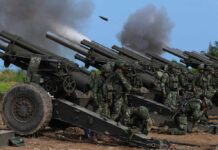 Hundreds in migrant caravan turn back, some trickle into Mexico