DUBAI (Reuters) – Western powers provided arms and intelligence to the Saudi-led coalition waging war against Houthi insurgents in Yemen for more than three years, despite criticism from rights groups and lawmakers.

They are now pressing for an end to the conflict that has killed more than 10,000 and pushed Yemen to the brink of famine.

British foreign secretary Jeremy Hunt is visiting coalition leaders Saudi Arabia and the United Arab Emirates this week to push for an end to hostilities.

Analysts say Riyadh and Abu Dhabi want to end the costly Yemen quagmire, but any peace efforts must overcome deep mistrust on all sides, while the Houthis may see an opportunity to profit from any pressure on the Saudis.

The West toughened its stance after the murder of journalist Jamal Khashoggi, a critic of Saudi policy, at Riyadh’s consulate in Istanbul on Oct. 2.

It opened Riyadh to potential sanctions and tarnished the image of Crown Prince Mohammed bin Salman, who launched the Yemen war.

Britain said it would press for action at the Security Council as the United Nations tries to salvage peace talks.

The coalition has intensified attacks against the Iranian-aligned Houthi insurgents, aiming to weaken them by focusing on the Red Sea port of Hodeidah, the group’s main supply line.

But Western pressure on Riyadh may give the Houthis an incentive to hang on, analysts say. The group controls populous highlands and the capital Sanaa.

After seizing the southern port of Aden in 2015, the alliance has made little progress. While it has air supremacy, the Houthis have proved better at guerrilla warfare.

It abandoned a June offensive on Hodeidah, a lifeline for millions, amid U.N. warnings of a humanitarian catastrophe.

Saudi Arabia is reluctant to exit without major concessions from the Houthis, who have launched missiles at its cities.

Riyadh and Abu Dhabi both want to contain Iran. But the UAE has forged its own Yemeni alliances to combat Islamists, some backed by Saudi, making it easier for Abu Dhabi to walk away while maintaining influence.

UAE-backed forces have made the only coalition gains and control a string of ports, including Aden, the temporary headquarters of the internationally recognized government of Abd-Rabbu Mansour Hadi, largely seen as inept.

WHERE DO U.N. PEACE EFFORTS STAND?

U.N. special envoy Martin Griffiths is trying to convene Yemeni parties for a new round of talks before the year-end to agree a framework for peace under a transitional governing body.

The Houthis failed to show up for consultations in Geneva in September, the first since 2016. Previous initiatives collapsed after they rejected preconditions for them to quit Sanaa and other cities seized after 2014.

Main terms now include transport of some wounded to Oman for treatment without inspection.

If negotiations go ahead, they will have to include the General People’s Congress of slain former president Ali Abdullah Saleh, which has wide support in Yemen.

UAE-backed southern separatists, who are undermining Hadi and his Islamist allies in the south, also want a say.

WHY IS YEMEN DIVIDED?

Yemen’s splits have festered for years. North and south Yemen united into a single state in 1990, but southern separatists tried to secede from the pro-union north in 1994.

After their defeat, resources flowed to Sanaa.

Saleh ruled north Yemen from 1978 and the unified state after 1990. His relatives controlled core parts of the army and economy, and corruption was rife.

Some of the Shi’ite Zaydi sect, who ruled the north until 1962, chafed as their heartland became impoverished. In the late 1990s, they formed the Houthi group, which fought the army and forged ties with Iran.

Though allied to Saleh, the Muslim Brotherhood and other Sunni Islamists gained strength. Jihadists set up an al Qaeda wing and began staging attacks.

WHY DID RIYADH ENTER THE WAR?

When mass protests broke out in 2011, some of Saleh’s former allies turned on him. The army split. The Houthis gained ground.

After a year, Gulf states persuaded Saleh to step down.

His deputy Hadi was elected to a two-year term to oversee a democratic transition, which was undermined by perceived corruption and Saleh’s allies.

In 2014, the Houthis seized Sanaa with help from Saleh loyalists, forcing Hadi to share power. But when a National Dialogue proposed a federal constitution, both Houthis and southern separatists rejected it.

The Houthis arrested Hadi in 2015, but he escaped and fled to Aden. Riyadh, backed by the coalition, entered the war on Hadi’s side, taking him to Riyadh.

The Houthis and Saleh’s forces were driven from Aden in 2015. Military stalemate followed. Saleh, hoping to cut a deal, abandoned the Houthis in 2017 but was killed.

His loyalists turned on the Houthis, setting their eyes on Hodeidah. 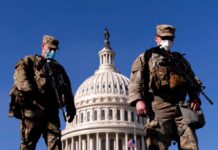 US Capitol braces for potential repeat of pro-Trump rally violence