HANOI (Reuters) – Vietnam hosts the second summit between U.S. President Donald Trump and North Korean leader Kim Jong Un later this week, with denuclearisation of the Korean peninsula and ending sanctions against Pyongyang the main items on the table.

Here are the key things that each side will be looking for at the Feb 27-28 summit in Hanoi.

WHAT THE U.S. WANTS

Denuclearisation of North Korea is the over-riding goal that Washington is seeking to achieve.

That means elimination of all weapons of mass destruction programmes in North Korea – the production of those weapons, as well as the intercontinental ballistic missiles that can deliver them.

WHAT IT MAY SETTLE FOR

The United States will seek to form a shared understanding with North Korea of what denuclearisation means at the summit, U.S. officials said on Thursday.

Washington is also expected to seek to establish a roadmap that sets expectations and the process for negotiations on denuclearisation beyond this week’s summit.

A freeze on North Korea’s weapons of mass destruction and missile programs is also likely to be on the agenda. North Korea appears to have produced enough bomb fuel in the past year to add as many as seven nuclear weapons to its arsenal, a report by Stanford University’s Centre for International Security and Cooperation said earlier this month.

North Korea has publicly called for an end to the crippling economic sanctions imposed by the United States and the United Nations, which will be its main aim at the summit.

But its concept of denuclearisation of the Korean peninsula could include removal of the U.S. nuclear umbrella for South Korea and nuclear-capable forces.

North Korea has also long called for a peace deal with the United States to normalise relations and end the technical state of war that has existed since the 1950-1953 Korean War concluded with an armistice rather than a peace treaty.

WHAT IT MAY SETTLE FOR

Washington has balked at signing a comprehensive peace treaty before North Korea completely denuclearises, but U.S. officials have signalled they may be willing to conclude a more limited agreement to reduce tensions, open liaison offices, and move toward normalising relations.

Kim said in January that North Korea is “ready to re-open Kaesong industrial park and tours to Mount Kumgang without any preconditions or price,”. The two inter-Korean projects require at least partial easing of sanctions to resume operations.

Kim also said North Korea is seeking from the U.S. “corresponding practical actions” for the “various practical measures” it says it has taken for the complete denuclearisation on the Korean Peninsula.

“Corresponding actions” that North Korea is demanding of the U.S. include “the end of hostile policies” against North Korea and the lifting of sanctions, a commentary by state news agency KCNA said on December 20.

What the ‘end of hostile policies’ entails is unclear. 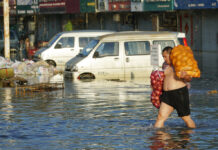