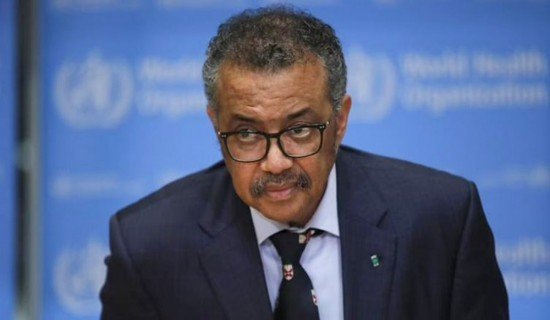 Kathmandu, Apr. 20 (RSS): Dr Tedros Adhanom Ghebreyesus, Director-General of the World Health Organization (WHO), will be arriving here on April 21 at the invitation of Minister for Health and Population Birodh Khatiwada.

The Director-General is scheduled to land here at 12:15 pm tomorrow. During his stay here, he will pay a courtesy call on President Bidya Devi Bhandari.  The meeting between the Head-of-the-Head and the WHO Director-General will take place on April 22 at the Office of the President, Shital Niwas.

Prior to visiting the President, he will call on Prime Minister Sher Bahadur Deuba.

Likewise, during the visit, the Director-General will meet National Assembly chair Ganesh Prasad Timilsena, Minister Khatiwada and Minister for Foreign Affairs, Narayan Khadka, senior officials at the Ministry, WHO representatives in Nepal and representatives of the United Nations.

Secretary at the Ministry of Health and Population Dr Roshan Pokhrel, the WHO Director-General will be arriving here on a three-day goodwill visit.  During his visit, he will observe the ongoing vaccination campaign against typhoid and the National Public Health Laboratory, said Minister Khatiwada’s press advisor Shantaram Bidari.  He will also visit the Patan Secondary School, and the Hanuman Dhoka and Patan Durbar Square.

The Director-General will be accompanied by the WHO Regional Director for South-East Asia, Dr Poonam Khetrapal and other WHO officials, according to the Ministry of Foreign Affairs. He will return home on April 23

﻿U.S. will not suspend Boeing 737 MAX planes; discussion on black...